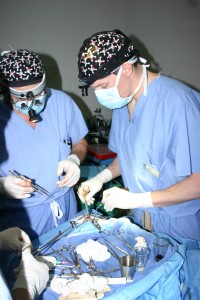 Good morning!  We are on the opposite end of the island but felt the quake and three after shocks.  We’ve heard that there was a land slide and that several people were killed.  It was a very weird feeling to be sitting and watch the water at our table move and see the chandeliers moving.  Hopefully we won’t have any more.
The operations are moving along and you should see the smiles on the parents as they look at their child’s new face and think of the new life those kids now have.  Wow!    Today we have 14 operations and more screening of kids. Two have had to be denied because they have chest problems.  It breaks the parents hearts!  I’ll send more news later.
Nancy Rosi, Outreach Volunteer