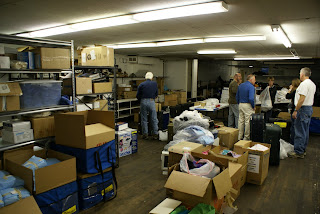 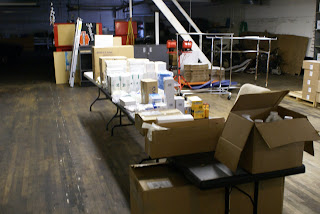 We arrived at the Harley Davidson storage area in Lakewood, Colorado around 9:00 A.M. What a sight to behold! There were 3 standard sized tables full of medical supplies, plus about 15 boxes on the floor with more equipment and boxes of things for the children as well. We had received new anesthesia machines that were purchased as a result of the typhoon earlier in 2008 over the Philippines. Also a heavy box containing a new autoclave. Some 15 volunteers were on hand to begin the process. We started out by bringing in 3 more tables to begin sorting. It was decided to sort everything by pre-op, surgery and post-op. Then we needed to divide everything in half, for the week in ILOILO and the other week in Kalibo. All told we ended up with 35 boxes and suitcases. Finally at around 2:30 P.M. everything had been inventoried and sealed up ready for shipment. It was a great deal of work at 50 pounds per box, but also a lot of fun as well. Once again, THANKS to Harley Davidson as they will deliver the boxes to DIA on the day each team leaves Denver. In turn as each member of the team checks in, they will also check in one box in addition to their personal belongings.