This morning, we left the hotel in Iloilo at 6:30 am, arriving in Pototan to find an additional 35-40 patients to screen.Everyone pitched in and got to it right away.Surgery began at 10:00 am, and 11 children were operated on today. 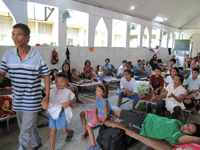 The “ward” (open air chapel) which houses both pre-op and post-op patients quickly filled up with patients who were admitted to the hospital because they came from long distances, and did not have the resources to return for surgery later in the week.It became apparent that this arrangement would not work.The ward was over-crowded, and the situation reached a critical point when it was determined that the crowding posed a risk to the patients who were having surgery. 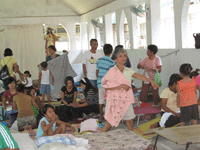 The Rotarians immediately made arrangements for all of the patients who were not scheduled for surgery until later in the week to be transferred to a local boarding house, where they are being sheltered until the day prior to their operations, when they will return to be re-admitted to the hospital.This will continue to besupplemental housing throughout the week.

The day was long, with the team arriving back to Iloilo at 8:00 pm.Spriits are high in the ward, with many grateful parent of patients who have had surgery, and many full of anticipation of their big day tomorrow. 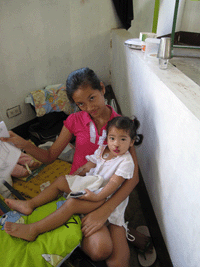 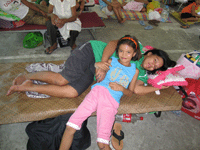 We are expecting another 15 children to have surgery tomorrow, with another 21 yet to screen.