Changing Lives, Theirs’ and Mine

When my plane landed at Kalibo International Airport I couldn’t help but smile to myself. All evidence pointed to the fact that I was in paradise. The heat of the sun on my skin, the warm breeze in my hair, the fresh coconut placed in my hands by Megs Lunn — I was definitely in paradise. I waited with nervous anticipation to meet the whole Uplift Internationale team. I met Gerry and Sally first, they were so incredibly lovely that my anxiety started to disappear. Then I met Kerri-Ann, Jonathan, Gina and finally Steve, the Head of Mission.

By now I was totally at ease with this big group of people I had never met before. I couldn’t have imagined how warm and welcoming they were. I knew that this week was going to be great. 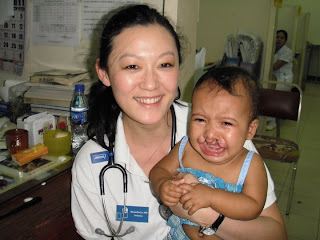 On our way to our hotel the bus drove by Roxas Memorial Provincial Hospital, which is the only government funded hospital in the area. It wasn’t much to look at — a small one storey building painted in yellow with capacity for 200 beds. It was definitely a far cry from the facilities we enjoyed back home. I couldn’t help but feel excited. I imagined that we would open the doors the next morning and kids would start to flood in. I couldn’t wait.

The next morning I stepped into the hospital for the very first time. I was hit with a sudden feeling of reminiscence of a hospital I had once known in 1980s China. There was a pungent smell of sweat and antiseptic, and patients lingered in the dim corridors. We walked through the crowded corridors toward the operating rooms where we would set up our temporary headquarters. People stopped what they were doing and stared as we went by, as if we were celebrities. 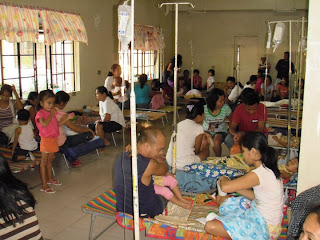 Once we settled into our command centre we split into two groups. The doctors went and started screening patients to see if they were fit for surgery, and everyone else stayed behind to unpack all of the medical equipment. I headed off to the outpatients department with the other doctors. The waiting room was full of parents and children, each and every one of them eagerly gazing at us with hope and optimism. To make things more efficient, we set up a few “stations” for the patients to move through in a conveyer belt style. Our first patient was a beautiful little eight-month-old boy with bilateral complete cleft lip and palate. He was fit and healthy and was at the perfect age for surgery. I was so happy. As the day of screening went on, the kids started to blur into one another. They were all so cute, they were all so full of character and personality, and they all exuded so much beauty – a beauty that went beyond their imperfect smiles. At the same time, I could feel that somehow, all the older kids, and the families of all the babies, were holding something back. As if they were afraid. Afraid to believe that a group of mysterious foreigners could suddenly show up and fix their defects and take away the months or years of stigma, ridicule and torment they endured. As if they were afraid to believe that everything they had prayed for was about to come true.

On the second day the operations started. I split my time between the operating rooms, the Post Anaesthetic Care Unit (PACU), and the outpatients department where we screened more children for surgery. In the operating rooms I witnessed for the first time how these life changing operations were performed and in PACU I made sure the kids recovered from the anaesthetic without complications. I was totally enamoured with the team and with everything the mission set out to do.

The highlight of my day was when our first patient came out of surgery. He looked like a perfect little sleeping angel. His mother smiled to herself as she held him, her eyes were sparkling with joy. So far, one operation performed, two lives changed and counting.

On the third day I was asked to screen a 12 year-old boy. After I checked him over and I was satisfied that he was fit and healthy for surgery, I took him to see the surgeons and anaesthetists to assess the exact procedure he needed and whether he was fit for anaesthesia. I led the boy and his mother down the dark unlit corridor, through the open court yard, towards our temporary headquarters. When we passed by people in the hall way, I noticed the boy would use his hand to shield his mouth and avert his eyes to avoid the gazes and stares of disdain. I suddenly remembered that someone told me that the locals believed that children with clefts were somewhat akin to vampires. In that moment, my heart broke. All I wanted to do was to hug him tightly and protect him from the cruelty of this superficial world. I wished with all my heart that I had the power to fix him there and then and allow him to stand up tall and hold his head high when he walked through the crowds. Unfortunately due to his age and the way his anatomy had developed, we did not have the necessary equipment to do his repair. He needed dental expanders fitted, and with regular adjustments, he would have his lips and palate repaired in a few months time. Luckily, we were able to find a local dentist who fitted the dental expander and Uplift was able to fund the follow up care and the surgical procedures the boy needs in the future. Although I was disappointed that the boy would not be leaving the hospital with his clefts repaired, I was happy knowing that he will get the surgery he needs.

Part of my duties included doing a ward round every morning with Steve to see the post-op patients and to decide which patients were fit for discharge. Every morning I was surprised by how brave these little souls were. Despite traumatic operations, they never complained about pain, they never made a fuss about having to drink a lot of water, and they hardly ever asked for basic analgesia. Every morning I was touched by how grateful the patients’ families were. One morning, I discharged a patient who had his lip repaired. I gave his family strict instruction about diet and wound care, and told them to make sure he drinks plenty of fluids. After making sure they understood everything I had said, I asked if they had any questions, and when they shook their heads to say no, I smiled and said “good bye and take care” to the boy’s elder sister. Suddenly the little Filipino girl, who only came up to my chin, pulled me close to her, hugged me, kissed me on the cheek, and told me “thank you”. “Oh, it’s nothing” I said reflexively. The warmth of her smile and the gratitude in her eyes told me that I was wrong. Our team had done everything – everything she had ever hoped for since the moment her baby brother emerged into the world. Her actions filled me with such a sense of pride and intense happiness that I had never felt before. I was a part of something very special.

On Thursday afternoon we were taken to St. Joe’s Orphanage. The orphanage was run by catholic nuns and it housed over twenty girls, aged five to sixteen. An unfortunate electrical incident led to a fire that broke out on New Year’s Eve, which burnt down the entire orphanage building. Since the fire, the girls and the nuns have been temporarily housed in two classrooms that are part of a school that the nuns run to fund the orphanage.

We were led into a small assembly room because the girls had prepared performances as a token of appreciation for our visit. They sang wonderful songs of well wishes for us, and as these girls, these beautiful little girls who have so little in the world, sang about how they wished us happiness, I could feel hot angry tears rolling uncontrollably down my face. I was angry with myself for pursuing such superficial things like designer shoes and bags, and for taking for granted things like loving parents, a good home, a roof over my head, all the things these girls didn’t have; I was angry with the world for being so unfair and unjust for not only denying these girls the opportunities, the love and the wealth they deserve, but also for taking away their home, their shelter in a blaze. How could God let this happen? It was difficult for me to leave the orphanage knowing that apart from a small donation, there was little I could do to help improve the lives of these girls. After meeting these girls, I vowed to myself to never take my life for granted again.

Inevitably, our week came to an end, and I was left with a final thought. I thought of how sad I was when I first saw the conditions our patients endured in the only public hospital in town, and my friend Jonida had said to me: “Don’t be sad, we can’t change the world, we can’t change reality.” I realised now that she was right, in one week, we couldn’t change the world, we couldn’t change reality; but after all our efforts, we did make a world of difference to the realities of 38 little lives. That’s good enough for me That makes it all worthwhile.

When we left, they told us that the kids were all very lucky, and they called us heroes. To me, to have had the chance to come this little corner of paradise, to have had the opportunities to make a difference to these children’s lives, to have met this group of wonderful, kind and talented people who had nothing personal to gain from coming on this trip; to me, I was the one who was very lucky. To me, the kids were the real heroes.