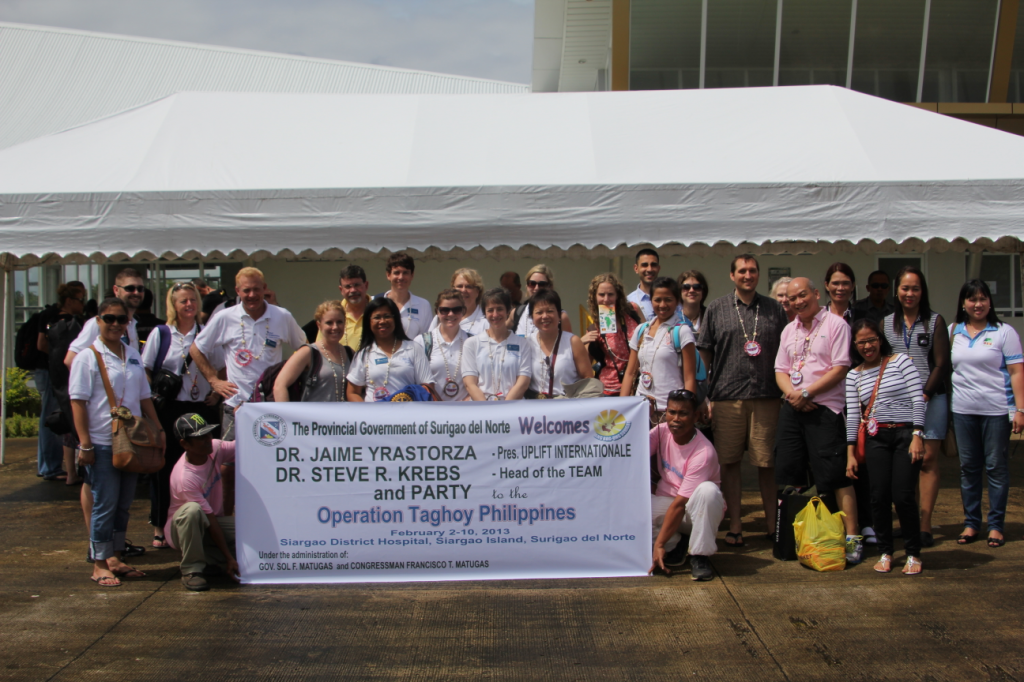 Uplift Internationale’s Operation Taghoy-2013 conducted the mission from February 1 to 10. The project activities were performed at the Dapa District Hospital on Siargao, a small island off the northeast coast of the big island of Mindanao and home to 40,000 inhabitants. The Mission Team accomplished a record 115 surgery procedures during the eight days of activities; some of the children had ferried from adjacent islands to receive the mending care.

The 40-member volunteer Mission Team was recruited from Colorado, New York, Arizona, New Mexico, Florida, Illinois, Missouri, Kentucky, Iowa as well as China and the Philippines. Members were accommodated in housing facilities of adjacent communities that, during the autumn of the year, host participants of the well-known annual International Men’s Surfing Competition events.

To Dr. Myroslav Harasym, anesthesiologist and wife Meriam Dominos go UI’s special thanks. They initially introduced the Emissary Team to Meriam’s beautiful home island and their important officials, months earlier; coordinated the multiple requisite logistical preparations for the mission, including the recruitment of a plethora of children in need of the mending care; and, helped organize the OR and its associated equipment and supplies. UI also extends deep gratitude to Governor Matugas, the Mayor of Dapa, and the Hospital Chief Dr. Digal for their support and hospitality were invaluable. Also, the Rotary Club of Surigao, by willingly extending Operation Taghoy their backing offshore, UI is thankful.

“Inspiring the Taghoy Committee to function for the common goal, attending to the multi-faceted aspects of the mission preparations, and overcoming hurdles to achieve cohesion of the Mission Team at work,” Dr. Yrastorza points out, “are keys to a successful mission. Dr. Steve Krebs, as Head of Mission, has been exemplary!”